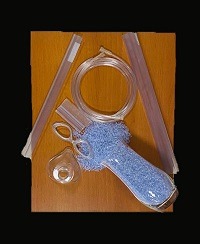 Yunnan Tin Company Group Limited (YTC), a century-old industry, is the largest production and manufacturing base in the world for metal Tin and the largest production center for tin profiles, tin chemicals and arsenic chemicals in China. It is also the biggest precious metals research and development center in China. With its leading role in Chinese tin industry and adequate international competitiveness, YTC is listed as one of the top 520 largest Chinese industrial enterprises sponsored by the Chinese government and one of the top Ten Group Enterprises prioritized by Yunnan Provincial Government.

YTC grew out of Gejiu Merchants & Investments Bureau that was firstly established by the local authorities of the Qing Dynasty in A.D. 1883. After the founding of the People’s Republic of China, YTC was listed as one of the 156 Key Construction Projects by the Central Government and large-scale extension was carried out in geological prospecting, dressing projects and smelting projects in YTC. Through the development for several decades, YTC has become an extra-large state-owned nonferrous metals allied enterprise, specializing in tin production, which integrates with mining, dressing, smelting, chemical industry, scientific research, exploitation of real estate, construction & building materials, machinery manufacturing, storage and logistics. YTC owns two Listed Companies which are Yunnan Tin Co., Ltd and Sino-Platinum Metals Co.,Ltd. The total asset of YTC is nearly ten billion RMB, and annual sales revenue is about six billion RMB. YTC covers an area of 200 square kilometers, owns about 60,000 staff, including active staff and retired staff, and takes charge of 150,000 populations. There are subordinate companies or agents in Beijing, Shanghai, Hunan, Shenzhen, Wuhan,Chengdu, Hongkong, United States, Germany, Indonesia, and Singapore.

The capability of YTC’s main producing system now is more than 40,000 tons organic tin, 40,000 tons tin profiles and tin chemicals, and 2,000 tons arsenic chemicals. Its products cover mainly the refined tin, tin-lead solder, tin profiles and tin chemicals. The company also produces other 600 categories in 20 series, including high purity precious metals material, platinum metals catalyst and metal products of Cu, Pb, Zn, Sb, Ni，As, Ag, In, Bi, Pt, Pd，Rh, Os and so forth. 41 products and equipments of YTC find good sale within 56 countries or regions in the world and its foreign exchange earns through self-export rank first in YunnanProvince for many years. It’s leading product with trademark of “YT” Brand has won the golden medal for the national excellence three times successively, which has been recognized as an inspection-free product for export. In addition, it has been registered in LME, hence becoming a well-known brand worldwide. The solder materials made of tin and lead won the only national golden medal for its high quality among the same trades. YTC owns complete testing measures & equipment and has been certified by ISO10012-1 measuring system in 1997, ISO9001:2000 quality management system in 1998 and ISO14001 environment management system in 2004.

YTC owns the state-level enterprise technology center and the biggest tin research & precious metals research and development organization in China. YTC is an integrate complex which operates from mineral exploration, mining, processing, smelting & refining, chemical production and precious metals to down-stream products of tin and other non-ferrous metals. The company owns advanced tin smelting and refining technology in the world and highly-developed processing skills & equipments in tin mineral dressing. The company has 474 senior experts or technical personnel engaged in all kinds of professions of which 64 of them enjoy Special Government Subsidy from the State Council. The expert force of YTC also includes one academician of ChineseAcademy of Engineering and five doctorial tutors. For the past few decades, the whole company has achieved 454 items of academic researches, of which 52 items were at the state level while about 404 at the ministry or the provincial levels. There are also 122 state patents in the company.

Through hundred years’ development, unique enterprise culture and brand-new management idea have been formed in the company. It owns good enterprise spirit, image, financing sources. In addition, with the emphasis on education in the last two decades, one innovative management team and a pool of well-educated and productive workers have been created, which play a pivotal role in taking Yunnan Tin to the next stage of development.

YTC was named as “Excellent Establishment of National Ideological and Political Work”, “The National May 1st Labor Merit Certificate”, “National Advanced Grass-roots Party Organization ”,”Satisfactory Enterprise for Customers in China” by the Chinese Quality Association User Committee and chosen as the Advanced Unit of“Abiding By Contracts and Keeping One’s Words” by the National Industry and Commerce Bureau.